Review and Giveaway: A Circle of Souls 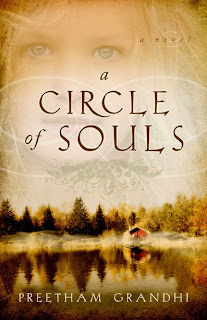 In this debut psychological thriller, of Souls by Preetham Grandhi, a young girl goes missing, and turns up days later. Janet Troy has been brutally murdered and her body has been displayed in an unusual and seemingly sacrificial way. FBI Special Agent Leia Bines, who has experience in cases involving children, has been called in to help find Janet’s killer.

At the same time, seven year old Naya Hastings has been taken to the psychiatric hospital to help her deal with some strange nightmares that cause Naya to sleepwalk (and almost jump off a balcony!). Dr. Peter Gram is assigned to Naya’s case, and is trying to help her get away from these terrifying dreams. Dr. Gram then realizes that Naya has an inside look into Janet Troy’s murder – Janet has been communicating with Naya in her dreams! Dr. Gram and Special Agent Leia Bines join forces to try and find Janet’s killer.

This novel contains so much more than just a man-hunt. The psychological aspects involving the children in the book, combined with some Indian beliefs, and an assortment of characters who are both necessary to the telling of the story and believable in their roles make this book a page turning novel. There were some surprises and a couple of twists I wasn’t expecting.

I wasn’t terribly surprised to find out who the killer was, however, that didn’t seem to take away from the story at all. The characters and the way that the story was told still kept me intrigued and wanting to see what happened next.

If you like psychological thrillers, I definitely recommend picking this one up!! In fact, I just realized it’s been a really long time since I did a giveaway!!!! All you have to do is leave a comment here on this post with your email address (if you don’t leave your email address, you comment will be deleted! I need to have a way to get a hold of you!!). The contest will run through Monday, August 10th, and I’ll pick a winner on Tuesday August 11th. Let’s say this contest is open to anyone who wants to enter! Good luck and happy reading!!!!

Check out A Circle of Souls website for more info about the book!!!

Pump Up Your Book Promotion Tour: The Book of Unholy Mischief 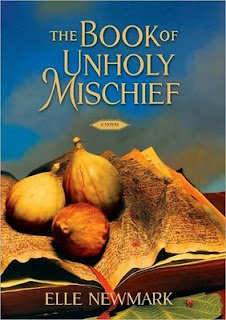 I was asked to read The Book of Unholy Mischief by Elle Newmark for a virtual book tour. When I read the description of the book, I was intrigued, but I had no idea what was really in store for me.


The story, set in 15th century , is centered around Luciano, a young orphan who is forced to live on the streets, stealing food to survive. The other main focus of this story is “The Book,” a mysterious book said to contain secrets such as a love potion, and a formula to stop aging in its tracks. When Luciano is caught stealing a pomegranate by the doge’s chef, Chef Ferraro, he is thrown in to a world which he could never imagine – instead of being punished, he is taken to the doge’s kitchen, cleaned up, and allowed to work in the kitchen as an apprentice.

Everyone is out to get this book of secrets, and they will stop at nothing to find it. The council of Cardinals is willing to torture and kill in order to find the book. The secret police, or Cappe Nere, is much feared all over the city, as they are ravaging and torturing everyone expected of knowing anything about the book – librarians, teachers, philosophers.

comes alive in this novel. Ms. Newmark gives great attention to the atmosphere and the description of the city. I felt as though I could really see the marketplace, full of merchants and goods, and of people milling around and trying to bargain. I loved the description, too of La Sensa, the annual feast and festival held for eight days for the people of . It was also interesting to hear the descriptions of the alleyways where Luciano and his street friends would hide to escape after they had stolen food, places only known to street urchins.

One other star of this novel, the food. At its heart, this novel is both a historical fiction novel, and a culinary fiction novel. While it doesn’t have actual recipes hidden in it’s pages, the description and the loving care taken to enhance the senses while talking about the food is amazing. You learn from Chef Ferrero that different ingredients can provoke different reactions and emotions. The Chef, Luciano’s maestro, shows again and again the power of food, and tries to teach Luciano many lessons using this gift.

I found this novel to be deeply entertaining, with twists and turns I wasn’t expecting (Luciano is faced with a choice to defend and protect his maestro, or being persuaded to turn back to his old ways by his street friends), and there is even a little love story in this book (Luciano falls in love with a young novice he sees in the Rialto). I was completely engaged and hooked from the very beginning of this novel.

I think this would be a great read for anyone who enjoys either historical fiction or culinary fiction. There is definitely something in this novel for everyone!!! Take the time to pick this one up – you’ll be glad you did because its mysteries and secrets will hold on to you long after you put it down!!!

Thank you to Tracee for asking me to host this book, and thank you to Ms. Newmark for an autographed copy of her fabulous book!!!

For more information about this tour, check out Elle Newmark's Pump Up Your Book Promotion page!!!
Posted by a real librarian at 6:00 AM 4 comments:

Pump Up Your Book Promotion Tour: Journal According to John 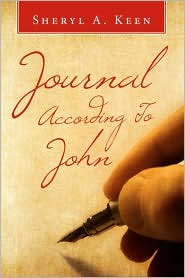 I am very happy to be writing a review in this book tour for Journal According to John by Sheryl Keen. After he gets into a bar brawl, John’s cousin Maya suggests he begin keeping a journal to help him work out some of the issues that seem to be plaguing him. Even though he is a psychologist by trade, John isn’t too keen on this idea. But, after some persuading by Maya, he starts documenting his feelings and thoughts. This leads to a mountain of self discovery, and an awareness of his reasoning behind his decisions and actions.

John starts to delve into his past and his tense relationship with his mother – which he has come to realize could play a major role in his behaviors. John is also dealing with a recent divorce, in which he could not give himself entirely to his wife, who ended up not being able to deal with his behavior any longer.

In this novel, Sheryl Keen was able to help us dive into John’s mind, and we were able to join him on this journey of self discovery. It is such a powerful ride – finally realizing that one needs help and taking the steps to restructure a life that had seemingly been out of control. The self-analysis is amazing – I saw such intelligent and insightful ideas and assessments. It helps one to understand that self reflection can do wonders for not only the soul, but to see how taking those steps can help in so many aspects of life.

This book was very entertaining, yet very powerful. It helped me open my eyes to some things that are going on in my own personal world, and I feel like I read it at the perfect time in my life.

Thanks to Tracee from Pump Up Your Book Promotion Virtual Book Tours!!

For more information about this awesome book, go to Sheryl Keen's Promotion page. And don't forget to check out more stops on this great tour!!!

Review: Jennifer Johnson is Sick of Being Single 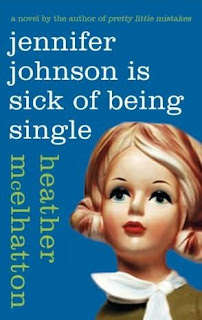 I love chick lit, so when I was asked to read Jennifer Johnson is Sick of Being Single by Heather McElhatton I jumped at the chance!!

Jennifer Johnson is your typical girl – smart, “chubby” (although I take major issue with a girl who is a size 12 being called chubby), working in a job that doesn’t even being to realize the potential that she has. She has always wanted to be a writer, but has been working as a copywriter in the marketing department of Keller’s Department store. There are a couple other things that make this more typical in the way of chick lit – she has a gay best friend, the boss from hell, a mean sister who is getting married, and a great guy friend who is in love with her, but she doesn’t see past the friendship. The thing that sets this novel apart from others in the genre is that McElhatton has a way with dialogue. With some witty conversation and great characterization, I didn’t mind that it seemed a little familiar.

There are definitely some great adventures included in the novel, from a bachelorette party gone bad, to some…interesting dates. I loved how the unlikely seems to happen, and throws Jennifer into a world and a life that she isn’t sure she’s ready for. She falls for Brad Keller, the son of the president of Keller’s Department store, and through a series of events, we realize that not everything is always wine and roses. One thing that didn’t seem familiar in this novel was the ending – I was NOT expecting that!!!

All in all, I really enjoyed this book. I fell right into it, and didn’t really want to put it down. It was also cool for me, as a new Minnesotan, to read about places I’ve been and streets I am familiar with, and yes…even the winter weather that I am SO not impressed with. I was entertained by this one, and I think you will be too!!