Pump Up Your Book Promotion Tour: Purged by Darkness 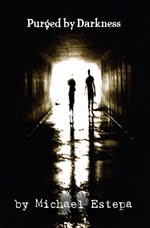 In the gang lifestyle, honor and loyalty is what is expected of you. Fear, death and betrayal is what often follows. In this world, no one wins and all those involved often find themselves in too deep to ever get out.

With the story revolving around six friends, it traces their rise ad fall inside the organized crime syndicate, the Triads. With their love for each other and their loyalties not far behind, it is the same quality that will push their friendship beyond all limits.

In the criminal underworld, the word friendship doesn’t exist. For this group of friends, it is all they have. Love is what keeps them together, but will it be enough to survive in a world where bullets speak louder than words and death awaits them at every turn?

How much do you know about gangsters and the criminal underworld? I have to admit, I don’t know much. I have seen The Godfather, but not many other movies. I have read The Mad Ones by Tom Folsom about Crazy Joey Gallo, but that’s pretty much the extent of my knowledge.

Purged by Darkness by Michael Estepa takes a look at the criminal underworld of through the eyes of Kai, an up and coming member of the Triads. Kai and his five friends have been involved in this organization since Kai was 15 and his friends were 17. Kai is the boss of his group of friends, and eventually becomes a Branch Leaders after he plans and leads a hit on another member who has broken the rules of the society. But, the life is not all about power and money. As the group of friends becomes higher in the society, they gain the resentment of other members as well as other Societies. The group becomes targeted and friends start to fall.

The problem is, once you are in, you are in for life. Kai comes to terms with his morality and what he wants for his future. After losing more friends than anyone should have to deal with, Kai decides to run.

I won’t tell you any more than that – you should read it to find out what happens to this gangster.

I have to admit, I really felt for this character. I can’t imagine losing your friends because of the life of crime you have chosen – a choice made as a stupid kid at age 15. It was hard to see him react to the deaths of his friends. And when he has to make the ultimate choice, I understood why he felt that he had to do what he did.

I had a little trouble with some of the dialog, however. I wondered if gangsters would really talk like that to each other at a couple points. But, I was able to get around that and appreciate the story for what it was – an action filled, coming of age story about six friends and the life they chose.

Thanks to Pump Up Your Book Promotional Book Tours and Michael Estepa for sending me this book!!! Check out http://www.michaelestepa.com/ to learn more about the author and his book!

The joy of audio books

I have always told people how awesome audio books are. But, I have to be perfectly honest with you - I had never really listened to one. I was never really in my car long enough to get into one. When I lived in Nashville, my commute was 5-8 minutes depending on the traffic lights. And my commute to my retail job was only 20ish minutes, and I like to sing in the car.

But the commute to my new FABULOUS library job is about 40-50 (depending on traffic) minutes away from home, and I figured if I'm gonna be working two jobs, this is the perfect way to get some reading in!!

And I LOVE IT!!!! I didn't think I'd be able to concentrate and follow along without having the words in front of me, but I totally get sucked in, and it makes the drive go so much faster! And, working at the library, I have a never ending supply!! YAY!!!

And now, library story of the day...

Pump Up Your Book Promotion Tour: A Note from an Old Acquaintance

Brian Weller is a haunted man. It’s been two years since the tragic accident that left his three-year-old son dead and his wife in an irreversible coma. A popular author of mega-selling thrillers, Brian’s life has reached a crossroads: his new book is stalled, his wife’s prognosis is dire, and he teeters on the brink of despair.

Everything changes the morning an e-mail arrives from Boston artist Joanna Richman. Her heartfelt note brings back all the poignant memories: the night their eyes met, the fiery passion of their short-lived affair, and the agonizing moment he was forced to leave Joanna forever. Now, fifteen years later, the guilt and anger threaten to overwhelm him. Vowing to make things right, Brian arranges a book-signing tour that will take him back to . He is eager to see Joanna again, but remains unsure where their reunion will lead. One thing is certain: the forces that tore their love asunder will stop at nothing to keep them apart.

Filled with tender romance and taut suspense, A Note from an Old Acquaintance is an unforgettable story about fate, honor, and the power of true love.

A Note from an Old Acquaintance is a beautiful love story filled with tenderness and true love. Bill Walker has such a way with words that I was instantly drawn in to the story and felt a connection with all of the characters. As I was reading, I couldn’t help but wonder what I would do if placed in this situation.

The story starts out in 2006, where Brian Weller is dealing with the death of his young son and his wife in a coma after a terrible car accident. Then, the email from someone he used to know fifteen years ago suddenly appears in his inbox. The story jumps back to 1991 where Brian meets Joanna Richman, and they fall instantly in love. But there is a problem – Joanna is engaged to be married to someone else.

The idea of soul mates is raised in this story. I felt the struggle that Joanna was facing. The man she fell in love with six years prior, Erik Ruby, has changed, and while she still loves him, she is questioning the man who he is becoming. After meeting Brian, Joanna feels that there is someone out there who understands her, her art, and her soul.

Erik, finding out about Brian and Joanna, places Brian in a situation and makes him a deal that he absolutely cannot refuse. Brian is now forced out of Joanna’s life. I even found myself sympathizing a little with Erik – even though I thought what he was doing was wrong – knowing that your fiancé is in love with someone else, and feels more for that other person that she feels for you. Making the choices and living with them…forever.

Back in 2006, Brian and Joanna meet again. I won’t say anything else, because I don’t want to give anything away. I do have to say that while some may think the ending was too neat, I think it was the perfect way for things to work out. I loved this book, it’s characters, and the way it was written.

Thank you to Bill Walker for sending me a copy of this awesome book. I highly enjoyed it!!! Check out his website – Bill Walker Designs!!

This review was part of a Pump Up Your Book Promotional Blog Tour. Thanks to Tracee for asking me to be a part of it!!

Well, it's time for some exciting news!!! After a LOOOOOOOOOOOONG year of searching and applications and interviews and rejections, I am FINALLY back in a library, baby!!!!!!! WOOOOOHOOOOOOOOOOOO!!!!!!!

I'm going back to my roots - I started out doing circulation, and that's what I'm headed back to. I love the customer service side to library work, and circulation is the perfect place to do that.

And to be perfectly honest with y'all, it's just amazing to be back in a library again. My first day - actually after my first minute - I felt at home. It's such a great feeling to be back where I belong.

Here's a story from my first couple days:

A woman is buying a couple books off the book sale cart. I'm trying to remember just how much everything costs.

Real Librarian: Sorry, it's my third day!
Woman Buying Books: Ohhhh... I applied for your job.
RL: *thinking* AWKWARD!!!
WBB: I thought they'd be interested, I come from a teaching background. Do yo mind if I ask about your background?
RL: Um, I have eleven years of library experience.
WBB: Oh.

Hahaha! Come to find out there were over a hundred applicants for my job. I feel so honored to have been selected!!!